I set up this blog in 2010 to record my 'round the world' motorcycle trip. In 2010 and 2011 I travelled from Alaska to Panama and then South Africa to Kenya. Mainly on my own but my wife came out for some of it. I also did some volunteering along the way.

That blog evolved into a book - Gone Riding, which is available in Kindle form here


So, please use the links to get a copy of my book and/or take a look at the facebook page. You can, of course, search through this blog to see the 'raw data' of my trip and lots and lots of photos! 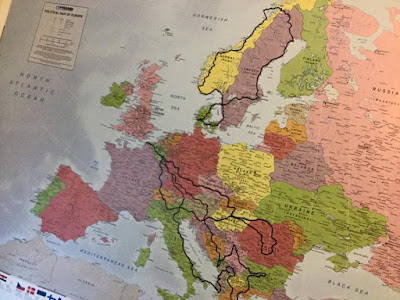 In two weeks time I'll be off on my annual bike trip. The map shows where I've been for the last three summers - this year it's the Baltic. Poland, Lithuania, Latvia, Estonia, Finland and Kaliningrad (hopefully).

Tracy will fly out to Riga and back from Helsinki. If she's lucky I'll pick her up and take her, otherwise it's a hell of a walk! 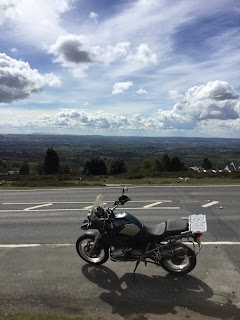 Out for a ride in the Midlands, late April. Starting to plan my summer trip. - The Baltic this year!
Posted by Dom Giles at 8:49 pm No comments:


Often people ask me how sales of my book are going. I'm not quite sure what they mean by this (numbers or responses?) but for me it's clear. I didn't write a book to make money or sell huge numbers. I wrote it to encourage others to follow their dreams.

Posted on Amazon.com on my birthday.

Of all the motorcycle touring adventure ever written... This one is by far the most brilliantly narrated... Much much better than Ted Simon books or the other guys... Entirely from my perspective are my opinions
Posted by Dom Giles at 10:55 am No comments:

Excellent book about Dom Giles' gap year.I picked up this book because it's got a nice picture of a adventure bike on the cover but this book is about more than motorcycling.

Dom seems to be having some kind of mid-life crisis,gives up his respectable job and buggers off around the world on a big,heavy motorcycle.,with little or no mechanical apptitude.

Dom writes in a easy style with a gentle sense of humour and although this book isn't a laugh out loud read it did make me smile.He did express that the trip had restored his faith in humanity and his story has encouraged me if not to ride around the World,to take my eleven year old son to Spain on the back of my v strom next year.
Posted by Dom Giles at 7:57 pm No comments:

Tom passed away yesterday. He lost his long battle with life and is now at peace.

I'm so glad I met him and rode with him in Africa. He lived a full life, helped those worse off than himself and loved travelling. A bloody good track record in my opinion.

What a worthy cause. 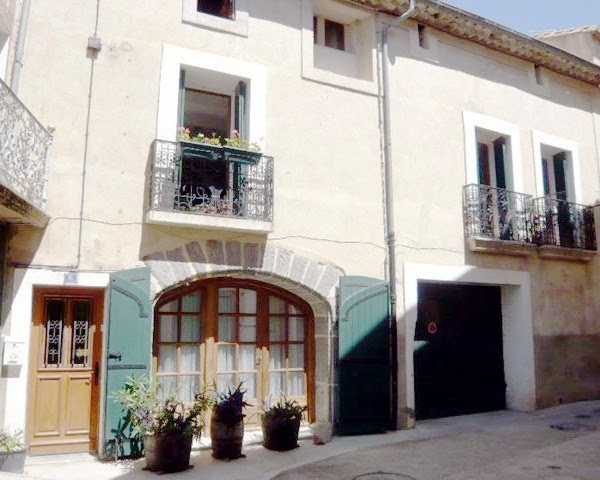 A tribute to Tom 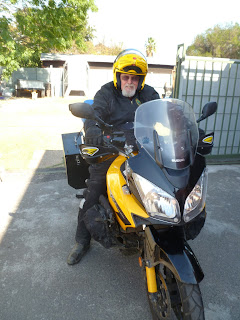 I met Tom in South Africa and we rode together for a few weeks up to Malawi. If you have read my book you’ll know that I’m not always complimentary about the man but deep down I knew he was a kind hearted person and I only wish I’d got to know him better.

We kept in touch sporadically and earlier this year I found out that he was dying. He’s very open about it and now probably only has weeks to live.

I wrote to him recently and he replied saying he’d just read my book (the last book he’s going to read!) and he liked it. That was certainly a relief.

I think in ‘Gone Riding’ I wrote about his somewhat cavalier attitude to motorcycle riding and how he kept on talking about her was going to die. In his last email to me he wrote the following which really resonated with me and I’d like to leave it here as a sort of tribute to a lovely man.

“I have a different sense of my ritual “today is a good day to die” mantra which I started saying out loud every morning shortly after setting out on my first motorcycle adventure down the west coast of USA a few months after getting my first bike and license eleven years ago when I was 62.
As a boy, I loved being the Indian when playing Cowboys and Indians. I eventually learned a bit about the Iroquois and that particular saying. It wasn’t the cry of a warrior off to battle looking for blood and making light of the threat to his own life as I had thought. Rather, it was what one said whether going into battle or off on any unusually risky adventure. It was an acknowledgement to yourself and the great spirits that today you were starting out aware of being fully alive and traveling on the edge of the precipice. Those days were worth living. Ordinary days (the one’s presumably not good for dying) were spent shuffling along through the routines with relatively low risk to life and limb – the boring day to day of existing. Who would want to die when the blood was meandering rather than pumping hard? Where a Cowboy (and a motorcyclist too) would rather die with his boots on, an Indian would rather die on “a good day”.

Glad I got to ride with you even though we didn’t really get to know each other around the evening campfires. I would have enjoyed that for sure.

And now it’s over. They tell me I should be dead in a few weeks. As the saying goes, all good things come to an end. And for me, it’s been grand!

Take care and keep doing it while you still can.”

Tom Richardson
Posted by Dom Giles at 10:15 pm No comments:

I'm at the Overland Adventure Show at Stratford Race Course this weekend. Book signing, sitting around and chatting with fellow travellers. Great way to spend the weekend.
Posted by Dom Giles at 9:09 am No comments:

Well, I was well enough to get up, get on the bike and ride 170 miles to San Marino. Then collapse in my hotel room for an hour before going to see the world's fifth smallest country.

It was worth it. I suppose I wasn't expecting much, after all as it's such a small country what could it offer but essentially San Marino is a medieval hilltop settlement situated at759 m. It has commanding views. 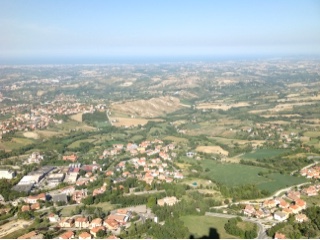 Looking east towards Rimini and the Adriatic

At the top is the Citta do San Marino, the walled city now full of tourists, restaurants and shops. Bizarrely ( at least I think it's rather bizarre) lots of the shops seemed to be selling guns and knives and medieval swords. Rather odd. 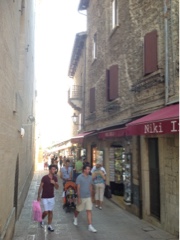 But essentially,  it's a beautiful place, which also happens to be a country. 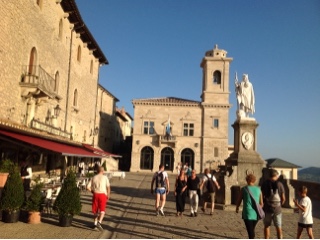 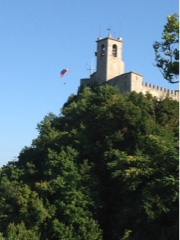 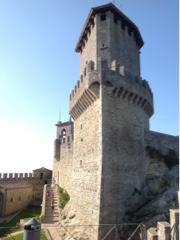 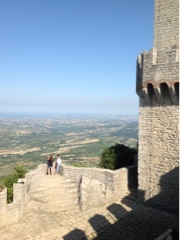 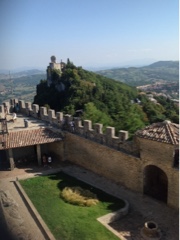 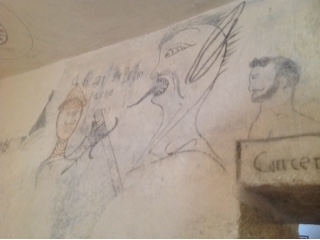 I found these 19th century drawings in the castle prison. 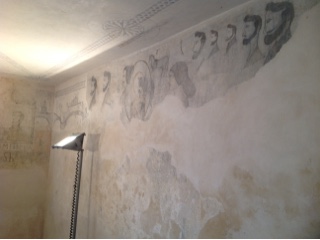 So that was San Marino.

I'm still not feeling well enough to be overly enthusiastic about anything at the moment. Sorry.

I've got 375 miles to do tomorrow to get to Germany and then 350 miles the day after to Belgium. Then on Monday I get the ferry to the UK and will go and see my friend Justin in Brighton. ( If you've read 'Gone Riding', Justin is the guy I mention at the beginning who bought me a copy of Ted Simon's Jupiter's Travels - starting me off on this whole motorcycle travel palaver)

In the next few days I'll post some final thoughts and facts and figures. But thanks for reading my blo. 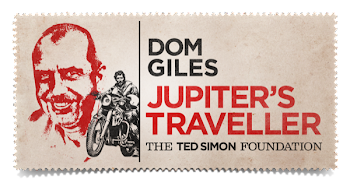 Hi. My name is Dom and in July 2010 I rode a motorcycle (partly) around the world. I started in Alaska and headed for Panama. It took me 6 months and I covered 21,000 miles. I then shipped my bike from Panama to South Africa. I returned to the UK for February and in March 2011 I flew to South Africa. Starting in Cape Town I took three months (and 9,000 miles) to get to Nairobi.

As well as riding a bike I stopped off and did some voluntary work along the way. In Mexico I worked on a turtle rescue project for two weeks and in Costa Rica at a Sloth Sanctuary for three weeks. In Cape Town I taught for three weeks in a Primary school in a township.

In North America my wife, Tracy, came out for three weeks and also joined me for two months in Central America.

I returned to the UK in June 2011. Although I'd kept a blog (obviously) throughout the trip I honestly had no desire to try to write a book. But that changed. Within days of getting home I started writing. Then in Autumn 2011 I found out about The Ted Simon Foundation and applied to be a Jupiter's Traveller. Unbelievably they accepted me and I starting a whole new, and much more frightening, adventure... Trying to write a book about my trip.
'Gone Riding' was published in November 2013. Signed copies are available direct from me at www.domgiles.co.uk. The book is also on Amazon where you can also get the kindle edition. There is lots more information about my trip and the book on my website where you'll find links to my Facebook page and Twitter account.

I now use this blog to write about my current bike trips. In 2013 we went to Scandinavia for the summer and in 2014 we went to Romania. Summer 2015 was spent solo around the Balkans. In July 2016 I went to Poland, the Baltic and Finland.

Dom Giles
I grew up in Jersey, Channel Islands, studied History and Philosophy and then became a History teacher. In the mid 1990s I went to live/teach in Argentina where I met my future wife, Tracy. Since then we have lived and worked in Colombia, the Falkland Islands, Ethiopia and Dubai. I currently live in Stratford-upon-Avon in the UK.